What to expect this new year?

In 2021, the “Corona” theme continued to dominate global politics and the economy, as well as international stock markets. World politics fought against the spreading Delta and Omicron virus variants with broad-based vaccination campaigns. The global economy continued to recover in 2021, but still had to pay tribute to the increasing globalization of recent years (decades), as supply chains remained vulnerable and international production could not keep up with the increased demand. The recovery of the global economy also led central banks to consider a policy shift, raising the specters of inflation and increasing volatility in equity markets. Overall, the stock markets showed a mixed picture. While the American and European stock markets were quite bullish, the Asian stock markets lagged or even showed bearish tendencies, as in China.

When the container ship Evergreen blocked the Suez Canal at the end of March, supply chains around the world were delayed. Cargo ships jammed up at the ports waiting for entry, or even had to accept longer travel routes. These delays were also felt by many consumers, especially with waiting times for electrical goods and furniture. The strict Covid entry controls at the major Chinese ports caused supply chain issues to flare up again at times in the months that followed, underscoring the importance of China and its policies to the major Western powers. Internationally active corporations, but also small and medium-sized enterprises, are likely to take this development last year as an opportunity to give their supply chains a stronger regional orientation once again in the long term (if possible). Just-in-time dependent industries such as the automotive industry are likely to accept the higher costs associated with the “onshoring” of supply chains to be able to reduce production losses and cutbacks. In the new year, the topic of “logistics optimization” is therefore likely to be increasingly on the strategic agenda.

Closely linked to the supply chain problem was the shortage of semiconductor products last year, partly as a direct consequence of the rapid global economic recovery. Sectors that cancelled orders for their semiconductor products in 2020 due to covid (mainly machinery and vehicle producers) now fell behind among semiconductor producers and were at a disadvantage in chip allocation compared to covid profiteers such as consumer electronics. This chip shortage will continue in the new year, despite massive investment in the expansion of new production facilities. The world’s few contract manufacturers of semiconductor products should therefore continue to experience a boom in 2022 and be quite willing to exercise their pricing power.

On the political side, the focus was on fighting the covid virus and supporting the economy. On the fiscal side, large-scale financial support measures were announced and adopted, not least US President Biden’s multi-billion-dollar infrastructure program. But private households also continued to take on debt at a high rate. Anyone who followed the development of real estate prices last year gets a good idea of where large parts of the new debt in the private sector went. This development has apparently also caught the attention of the German financial supervisory authorities, so that German banks will have to increase their capital buffers in future to be able to cope with the increased valuation risks on the real estate market. The real estate crisis in China, which originated in the difficulties of the largest real estate group Evergrande, may have served as a cautionary tale here. 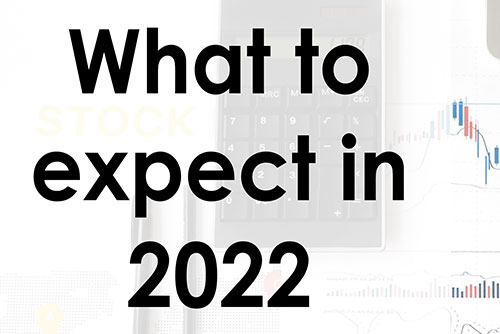 As in the real estate market, prices on the commodities markets also rose significantly in 2021. Prices for energy sources such as oil and gas, but also for industrial metals such as copper and aluminum, increased significantly in some cases. The commodities market in particular was characterized by China’s hunger for energy and raw materials. Consumers also felt the effects of these prices, some of which were several times higher, at supermarket and DIY store checkouts when buying food and building materials. This picture was not only regional, but international and set the agenda of the central banks, especially in the second half of the year 2021. While in Europe the ECB had long communicated the image of temporary inflation, the Fed in the USA reacted earlier and prepared the capital markets for countermeasures soon, including gradual interest rate hikes in the new year. In line with the American model, other international central banks are also likely to dare to rethink a more restrictive monetary policy in 2022, provided that the global economic recovery does not allow itself to be thwarted again by Covid.

At the political level, government elections (not only in Germany) revealed the public’s desire for a “breath of fresh air” in the government cabinet, in particular to finally tackle the issue of the energy transition and sustainability. A trend that was also welcomed by investors and capital market investors in 2021 and thus also introduced the financial world to the topic of “ESG”. This ESG concept and the increasing ecological awareness, especially among the younger generation, should also play a major role on the capital markets in the new year and influence the business policies of both large corporations and medium-sized companies.

2021 was also marked by regulation. The Chinese government caused frustration on the stock market with its cross-sectoral regulatory measures and took particular aim at the country’s technology sector. The topic of cryptocurrencies also showed the international desire for stronger regulation of this new market. As the “old financial world” is now also dealing with the topic of cryptocurrencies, the regulation of this new market is likely to be pushed not only for security and consumer protection reasons, but also for lobbying reasons. After all, it is likely to benefit the “old financial world” if FinTech’s and neo brokers are slowed down in their rapid growth. The regulation of this sector is likely to continue in the new year, but investor interest and the investment solutions offered for this new market will continue to rise.

Even though negative political, economic, and social issues continued to dominate the year, the bottom line is that 2021 was a successful year for equities. The European and U.S. equity markets gained around a quarter. Commodity and real estate investors were also quite satisfied, with the value of their investments increasing by more than a third in some cases.

For the new year 2022, we expect that investors will increasingly allocate their capital in favor of value stocks and realize gains in growth stocks – this trend has already become apparent in the first days of the new year. The rising interest rate level in the USA for the foreseeable future should also increase the attractiveness of US bonds for institutional investors in the medium term and could lead to a shift to the detriment of growth stocks with very high valuations.
In terms of valuations, we still see catch-up potential for the European and Asian (especially Japanese) equity markets. From a sectoral perspective, growth industries should recover from the initial profit-taking in the new year by the second half of the year at the latest and the equity market should have adjusted to the recessionary central bank policy. Overall, however, volatility on the equity markets is likely to remain high, as Covid, China, inflation and also political flashpoints such as the China-Taiwan or Russia-Ukraine conflict will continue to be an issue in 2022.

We remain positive on equity markets for 2022. A good mix of growth and value stocks as well as thematically and regionally selected sector investments remain the core of our portfolio strategy. For precious metals, we expect a recovery in value in the new year that is (in our opinion) months overdue and therefore remain invested. To manage the market risk and the equity ratio, in addition to a higher cash ratio, a shift into convertible bonds and inflation-linked bonds will be made selectively in the new year.

As a superior goal, however, we wish all our customers, business partners and interested parties a successful and healthy year 2022.

Stay up to date with our newsletter directly into your inbox